Crowdsourcing is an increasingly popular way for companies to source new ideas. With innovation tournaments, companies essentially issue an open call for new ideas and select at least one winner from those submitted after a prescribed time period. In 2012, PepsiCo’s “Do Us a Flavor” tournament helped the company create the “cheesy garlic bread” flavor which contributed to an 8% increase in sales in the three months following the tournament. Other products created this way include rugged Dell laptops for marine use and thematic Lego sets.

However, many innovation tournaments fail to produce the desired results. For example, when Dell launched its Idea Storm crowdsourcing initiative, it received more than 10,000 ideas from users around the globe. Tournament administrators facing such a high volume of ideas face a “tremendous effort” in idea selection and may “not be able to filter and select the most promising ones.”

So what makes innovation tournaments successful? A new study in the Journal of Marketing explores how companies can structure tournaments to drive meaningful results. Simply generating a high volume of ideas and sifting through them looking for gold is not the right approach.

Move Beyond “Volume” by Focusing on Participation Intensity

Our research demonstrates that firms should move beyond the “volume” approach. Instead, they should focus on stimulating ideators’ participation intensity; i.e., their engagement and active involvement in the platform throughout the tournament. Ideators with high participation intensity are those who repeatedly view and update their ideas in the platform. Data on ideators’ repeated viewing and updating behavior can be readily obtained from online idea generation platforms. Yet most firms now routinely monitor only the number of ideas and number of ideators, favoring that data over markers of participation intensity.

The Role of Moderator Feedback in Stimulating Participation Intensity

To answer these questions, we conducted two longitudinal experiments using a commercial innovation tournament platform. These longitudinal experiments allow us to examine the causal effect of feedback type and timing on participation intensity. In each of the experiments we organized a tournament called “ESE Innovation Tournament” where we invited students of the Erasmus School of Economics in the Netherlands to contribute ideas that would have an impact on the school by 2030. Over several rounds, we then experimentally manipulated the type of moderator feedback given to each idea to measure the impact of feedback type and timing on ideators’ participation intensity. 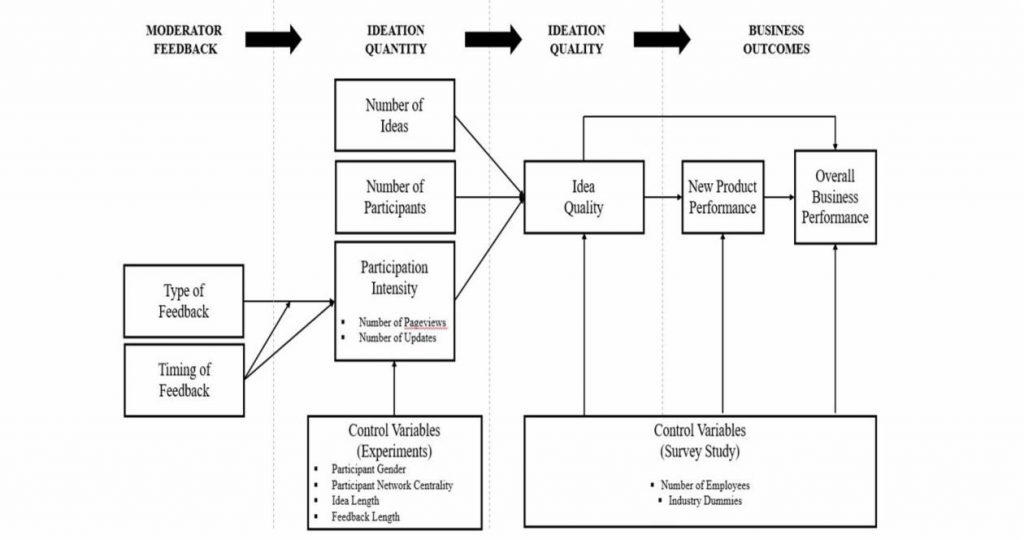 Our research demonstrates that companies need to spend more attention on increasing participation intensity to ensure the success of innovation tournaments. We suggest that participation intensity should become a behavior to monitor, a metric to report, and an outcome to incentivize. For example, firms may want to consider encouraging ideators to remain actively engaged in the tournament (e.g., viewing and updating their idea over several rounds). Firms should also demand third-party platform providers to report participation intensity routinely (e.g., at the end of every day) beyond the number of ideas and number of participants.

We also show that firms can incentivize participation intensity through moderator feedback. Firms should train moderators to challenge participants’ ideas and highlight to participants the “work that still needs to be done” for the idea to be successful. Unambiguously signaling that an ideator needs to invest more effort to accomplish her goals (in turn, leads her to increase her efforts) is good. However, the effectiveness of criticism on participation intensity seems to attenuate over time. Therefore, moderators should frontload their criticism of ideas to the early rather than late stages of an innovation tournament.